“Pose,” boasts the largest transgender cast in starring roles. Murphy created the role of Lulu, a fashion-loving diva who is second-in-command to the mother of the house, specifically for Hailie.  Hailie also stars on the hit Freeform series, “Good Trouble.”

A native of Los Angeles, Hailie started her career at an early age as a SparKid dancer for the WNBA Sparks. Sahar’s film debut came in 2011 in the musical LEAVE IT ON THE FLOOR.

Soon after, she co-starred alongside Jeffery Tambor as “Adriana” in the third season of the award-winning Amazon series, Transparent.

She recently starred in the Off-Broadway production of Charm.

Hailie has overcome many challenges presented to her as a transgender woman and has been featured as one of Hollywood’s New Rising Talents in OUT magazine.

Sahar was honored with an invitation to speak  on the HIV/AIDS epidemic at The Ronald Reagan International Trade Center for the 57th Presidential Advisory Council, and continues to contribute to the East Los Angeles Women’s Center against domestic violence.

Hailie was recently featured in a beauty is what we bring to it story for Allure magazine, where she revealed a facial birthmark.

Hailie is currently featured in Playboy, where she talks about inclusion and the meaning of womanhood. 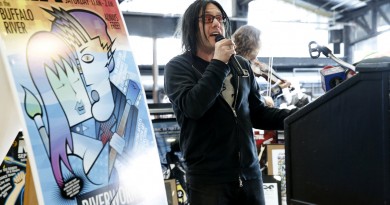 Robby Takac & Music Is Art {MiA} are moving location in 2017

Forget the Extinction Rebellion – Vintage clothing is helping save the world

October 27, 2019 Fattie Comments Off on Forget the Extinction Rebellion – Vintage clothing is helping save the world