The Bachelorette Debut in Randi Rahm

Clare Crawley made her Bachelorette debut at The Bachelor finale wearing Randi Rahm.

Talking about what she is looking for, Crawley reminds us all that love has no age barriers, named the oldest Bachelorette in history.

If this is a taste of the fashion we are about to see in the upcoming The Bachelorette, then we are hooked!

Earlier in the evening, viewers got to watch the ending of the The Bachelor, as Pilot Pete proposed to fan-favorite, Hannah Ann. People were also talking about

Hannah Ann’s gown, which was also designed by Randi Rahm. Known as the Bridgette Bralette, this blush toned gown had social media buzzing.

A classically trained conductor and concert pianist with degrees in art history and music, Rahm was destined for success in a creative field. Her design vision combines her love of dance, fine art, and music- a pastiche of influences which helped Rahm innovate throughout her career. Rahm has been dressing Hollywood icons, Broadway leads, elegant brides, and power women and men around the world of all shapes and sizes for over 25 years.  As the last remaining American couture house, Randi Rahm is proud to be made in New York. 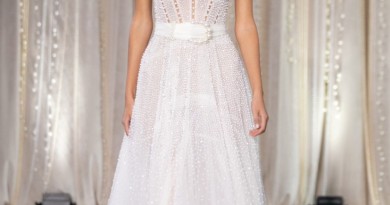